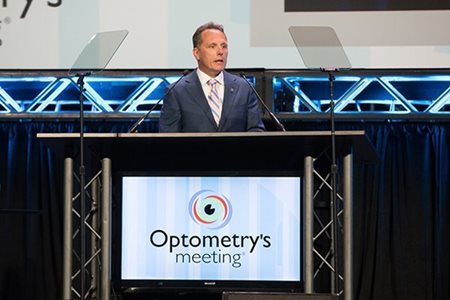 David Redman, O.D., has been named the “Optometrist of the Year” for 2017 by the American Optometric Association (AOA). Dr. Redman is a practicing optometrist and partner in Precision Eyecare Centers in San Jose and Mountain View in California.

The award, given to him during Optometry’s Meeting this month in Denver, recognizes Dr. Redman’s outstanding service on behalf of the profession and the visual welfare of the public. Earlier this year, Dr. Redman, who served as COA president from 2008-09, was named the “Optometrist of the Year” by COA.

Dr. Redman’s advocacy on behalf of the profession resulted in a landmark California laws that protected optometrists’ independent judgment in serving patients and expanded optometrists’ roles in treating glaucoma and caring for diabetic patients. He has also been a leading voice in the effort to expand eye care access to school-age children.

Dr. Redman’s public service has included organizing and participating in countless vision care clinics, serving on the board of Salud Para La Gente clinics and on the First 5 San Benito Children’s and Family Commission.  He has also made numerous appearances on the San Francisco Bay Area NBC affiliate channel KNTV, educating viewers on dry eye and children's vision issues. For EB's exclusive coverage on Dr. Redman's mantras for success, head to the July Last Look.

"We have a lot to do, but optometry has always been ready to take it all on," Dr. Pierce said in his inaugural address, which focused on the AOA's future. "We will educate the public with our straightforward and direct message about the benefits of our eye examinations, the impact of our personalized care and the power of our early diagnosis of life-threatening and sight-threatening diseases and conditions."

Other award winners at Optometry’s Meeting were:

Young Optometrist of the Year: Matthew Jones, O.D., of Arkansas.

Paraoptometric of the Year: Carol Lovell, CPOT, CPOC, of Wyoming.

Optometry Educator of the Year: Mark Swanson, O.D., of Alabama.