How going to the dogs can build better business and relationships

man’s best friend has never been so close a companion as today’s dogs. They are plentiful, privileged, and pampered, thoroughly rewarded for the love and friendship they provide their families. With nearly 37 percent of U.S. households owning dogs and their numbers estimated by the American Veterinary Medical Association at nearly 70 million, dogs are a key part of life for many Americans. And for a lucky group of optical professionals, they are part of the workday, as well.

Shop dogs come in every breed and size, welcoming patients and adding a charming something extra to dispensaries around the country. Though four-legged employees may take some added work on a daily basis, the return on investment can be counted in many ways.

“It is said that the whole mood of a room can change when a dog enters. Dogs have a calming effect and very positive energy,” says Brent Zerger, director of communications and retail operations for l.a.Eyeworks. “They are so elevating to one’s spirit! They can be a great babysitter to children while their parents are shopping. In Los Angeles, having a dog in the store is very welcoming for dog owners who are in the habit of spending a lot of time with their animals.”

Robert Alianiello, O.D., of Alianiello Eye Care, Kingsville, MD, and his 12-year-old border collie, Tucker, have worked together on and off over the years. On one occasion, Tucker helped convince a young patient that wearing glasses could really contribute to a good time. Alianiello shares the tale here…

“I had a patient come in at the end of the day to pick up his glasses. He was about nine years old and was very adamant about letting me know he didn’t really need glasses and he wasn’t going to wear them.

“My optician had him put his glasses on and told him to look around the room to see how much better things looked through his glasses, and he looked at the wall and asked her about the dog in the picture. I told him about Tucker and asked him if he wanted to check out his new glasses by throwing a Frisbee for the dog.

“I had the patient throw the Frisbee a few times without his glasses, then had him put his glasses on and he immediately yelled how much better he could see. Having my dog at work helped convince him that he did actually see better with his new glasses.” 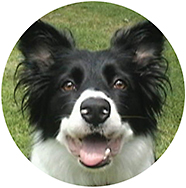 Tucker is ready for patients

The first canine “l.a.Eyeworkers” were several generations of pugs who came to work five days a week, notes Zerger. Currently, Toshiko, a five-year-old Akita who lives with store manager Tarlan Ghavami, is a full-time employee at the Melrose shop in Los Angeles.

Tucker is more of a part-time employee at Alianiello Eye Care, the Kingsville, MD-based practice of Robert Alianiello, O.D. The 12-year-old border collie is a presence, but isn’t in the dispensary every day. “I don’t usually have him down in the dispensary, but my practice is in a house that was converted to an office, so I will often bring him to work and let him stay in the apartment upstairs. My patients who know this often refer to the upstairs as ‘Tucker’s Apartment,’” Dr. Alianiello says.

Having a dog can be a good ice breaker. “It’s a more relaxed feeling here. When they see you have a dog on the premises, it’s a stress reliever,” says Julie Kubsch, a licensed optician and owner of Specs Around Town in Bloomington, IL, who lives and works with Lennie, an eight-year-old shih tzu. “If Lennie doesn’t come to work, it never fails—someone will always come in and ask, ‘Where’s Lennie?’ You make people sad when the dog’s not there because they’re used to seeing him.”

Having a dog in the optical can be a little like hiring a chief marketing officer. “It’s funny, people walk through the door and they couldn’t remember our names for anything, but they know Lennie’s name,” Kubsch says.

In addition to his customer outreach, Lennie is a media figure as well, and locally he is a regular in news stories about bringing your pet to work. “Lennie does get celebrity out of it because he frequently gets featured,” Kubsch says. “About every three or years someone is writing a story about taking your dog to work, and it’s good marketing for us. You can also see him on our Facebook and marketing pieces.” 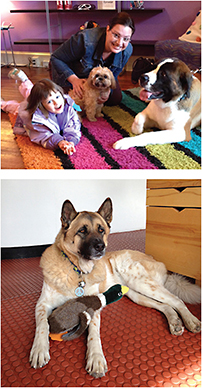 Having a practice pup can also influence business by creating a bridge between the staff and clients, says l.a.Eyeworks’ Zerger. “Sometimes clients walk by and see a giant Akita in the window and come in just to say hello and end up shopping, too. Toshiko often attracts people just by lounging in the window.”

Having a dog-friendly practice can help attract and keep patients, even without a constant presence. “I have pictures of Tucker throughout my office,” Alianiello says. “This has helped promote a more personal bond with my patients, especially the dog lovers.” Alianiello also features Tucker at AlianielloEyeCare.com.

Rocco has been in optical practically his whole life. In fact, on the way back from the puppy store, the now nine-year-old, eight-pound Blue Applehead Chihuahua made his first sales call to Claudia Duvall at Optics by Victor in Beverly Hills with his owner David Cutler, sales rep for Barton Perreira for New York, Los Angeles, San Francisco, and Chicago.

“Since then, I’ve brought him on practically every call outside of New York City,” where they live, Cutler says. “At this point, pretty much everyone knows him. His best animal friend is Raskal J. Fox, who’s mom is Laura Friedman at Dan Deutsch Optical Outlook West Hollywood.”

Logging about 330,000 air miles, Rocco has been happily ensconced in a stealth puppy bag under the seat of 110 commercial flights and holds Silver Elite Status on Virgin America. Not surprisingly, he is a pro at life on the road, serving as a companion, entertainment, and a dash of marketing assistant. “During appointments, as a business partner, he adds an additional cuteness quotient to my overall persona, making it exponential,” Cutler says. “I don’t usually take him out of his travel case until the end of the appointment because he would want to sit on my lap the whole time, which would make a sales meeting unwieldy. Ugh, OK, I admit it—he’s on my lap for like 50 percent of our appointments. When we’re done with frame selection, we let him run around the shop to explore the space. The places that are used to him the most ask to have the case open during the appointment.”

Not only is he a good salespup, Rocco also makes life on the road better for Cutler, who notes: “Rocco is my forever guy. He’s the best travel mate because he keeps me company on long drives and in hotels when I’m on the road. Every moment with him is cute and funny.” 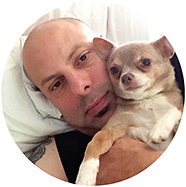 But having a shop dog isn’t all treats and belly rubs. “A shop dog MUST be very well trained and obedient (and not have a taste for acetate frames!),” says Zerger. “For example, you cannot be distracted by the dog running out the front door. You have to know that your dog will not be confrontational with another dog who might visit.”

Four-legged employees have their worker’s rights, too, needing breaks, meals, water, toys, and a comfy napping spot, as well as a getaway from the public, whether for the dog or for human guests.

“Having the ability/space to seclude the shop dog is important for times when and if it is needed. For Toshiko, everything is arranged so she has water, food, treats, and at least two walks per day.”

Workarounds are part of day-to-day life with a shop dog, Kubsch says, “There are a few [visitors] who don’t care for dogs. We accommodate, we are fine with it.”