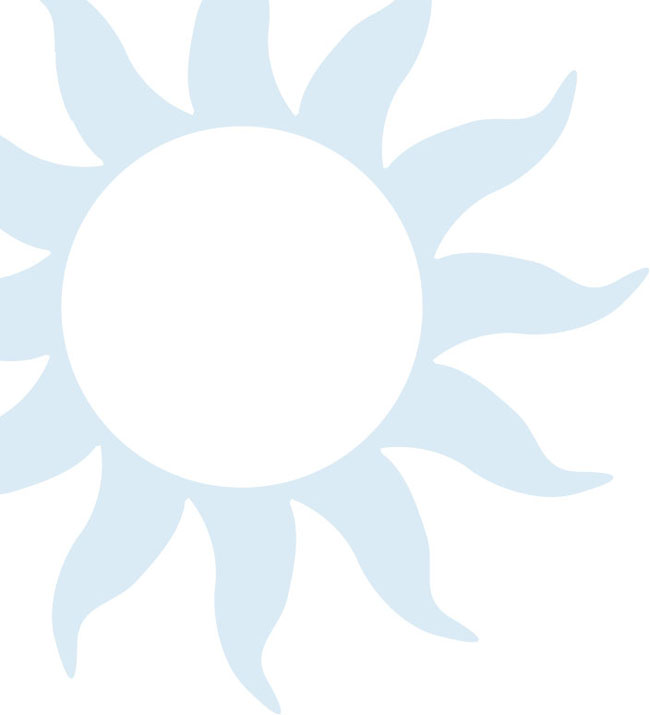 The Piper Jaffray 23rd semi-annual “Taking Stock With Teens” survey revealed some interesting facts about the role of technology in teens' lives—and the potential need for specialized eyewear.

A recent survey by VSP Vision Care found that seven out of 10 children do not wear protective sunwear while spending time outdoors.

The Vision Source 2012 North American Meeting hosted more than 3,000 members, staff, and vendors, the largest crowd since the meeting's inaugural event in 1991. The meeting, which was held from April 25 to 28 at the Hilton Bonnet Creek Resort in Orlando, Fla., provided Vision Source members with the latest news and information, as well as best practices, for the industry.

Highlights of the meeting included a presentation by consultant, trainer, and author Dennis Snow, the Vision Source Experience schedule featuring Dr. Walt West, and a fundraising raffle benefiting the Vision Source Foundation. In addition, the event saw the announcement of new partnerships with Transitions, Oakley, and Care Credit, and the rebranding of Vision Source exclusive products by Essilor and CooperVision was revealed. 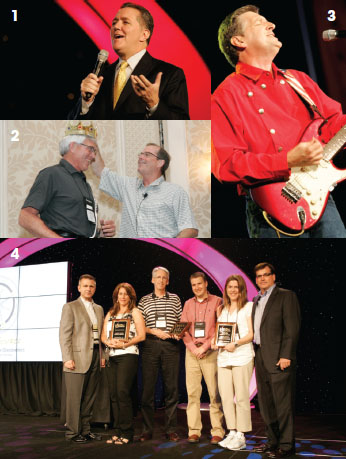 Registration for the 2012 Optical Lab Division (formerly the Optical Laboratories Association) meeting is now open. The event will again be held in conjunction with International Vision Expo West, scheduled for September 5 through 8 at the Sands Expo and Convention Center in Las Vegas.

The continuing education program—which begins Sept. 5—will feature sessions on private-label branding, the impact of warranties and redos, integrated electronic marketing for labs, digital surfacing workshops, and a panel discussion on what ECPs want from labs.

Optical Lab Division members may register for free, with complementary breakfasts, luncheons, and programming. Registration for non-members is $50 per session.

The Optical Pioneers Hall of Fame banquet is also scheduled during VEW—on Sept. 5 from 6:30 to 9:30 at the Venetian hotel. Tickets are $90.

For more information, or to register for meeting events, visit thevisioncouncil.org/labmeeting.

Top-ranked golfers, a sudden-death finish, and a plethora of events raising money and awareness about eye health combined to make a successful 2012 Transitions Championship at Innisbrook Resort and Golf Club in Florida. The PGA Tour event featured five of the Top 10 world-ranked professional golfers, with Luke Donald winning a sudden-death playoff on the 18th hole.

Transitions Optical and its industry partners sponsored a variety of fundraising and informational events throughout the week, including its Healthy Sight Village, a Think About Your Eyes Pavilion, sports vision/eyewear tents, and several family-and youth-oriented activities promoting eye health.

Funeral services were held last month for Bud Bargman, who passed away at the age of 81. Bargman spent 62 years with Topeka, Kans.-based Hawkins Optical Laboratories. He was co-owner and worked in production and sales for 20 years before becoming president in 1969. In 1992, he became chairman of the board, and retired in 2010.

Throughout his career, Bargman served as a charter member of the OLA's (now Optical Lab Division) “Optical Pioneers” and cochair of the Centennial Convention. He also served as liaison to the American Optometric Association and the American Optometric Student Association, and was a board member of the See To Learn Foundation. He received the Kansas Optometric Association's 1994 Vision Service Award, and held an honorary membership. In 2003, he received the Vision Service Award from the Heart of American Contact Lens Society.

Bargman is survived by his wife, Marvene, his children, Kevin and Cheri, as well as his four grandchildren.

PFO Global and VSP Optics Group are co-developing digital lens fitting and dispensing technology for use on tablet or mobile computers. The companies have applied jointly to patent the technology, and have signed an agreement giving VSP exclusive distribution rights for the technology, which the duo plans to introduce to the U.S. market later this year.

The American Optometric Association's 2012 Optometry's Meeting will commence June 27 to July 1 in Chicago. The event boasts more than 200 hours of continuing education and more than 200 exhibitors showcasing the latest in eye and vision care, as well as numerous networking opportunities.

Coinciding with the meeting, the Optometric Historical Society will hold a Reminisce-IN honoring the father of modern optometry, Irvin Borish, OD, DOS, who passed away in March. The tribute will be led by Alden N. Haffner, OD, president emeritus of SUNY, College of Optometry and a long-time friend of Borish.

The American Optometric Association (AOA) and the Opticians Association of America (OAA), with sponsorship from Luxottica and The Vision Council, have formed a SUN alliance to empower ECPs with information to properly educate and prescribe appropriate sun protection to their clients. A comprehensive training program is at the core of the initiative, created to address the health concerns of ultraviolet (UV) damage and help ECPs deliver proper eye protection.

The COPE- and ABO-approved educational series, “Protect, Prescribe and Present,” a three-part series covering the basics of UV exposure as well as how to prescribe and dispense proper sun protection to patients, is available on the AOA (aoa.org) and OAA (oaa.org) websites. 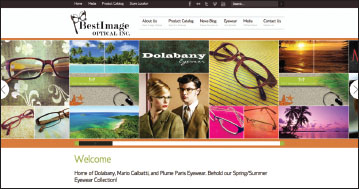 Eschenbach is now offering free, one-hour webinars on a variety of low vision topics, from device category reviews to clinical and practice management tips. A full list of upcoming webinars is available on the company's website, eschenbach.com, under the Upcoming Webinars link in the Resource Center for Professionals section.

Best Image Optical's corporate website has gotten a face-lift, with a new color scheme and moving tiles to showcase the latest eyewear offerings as well as models and summer photography. The company has also updated its Mario Galbatti Eyewear website, mariogalbatti.com, with a new red background and brand model that goes hand in hand with its latest ad campaign.

China may still be an enigma wrapped in a mystery and cloaked in secrecy when it comes to some matters, but not high-end optical retailing. LensCrafters in China proves that point.

Premium brands, premium prices, and brand enthusiasm are driving its robust growth. By the end of 2012, LensCrafters China plans to have 271 stores, up from 221 as of March, in 28 cities. By year-end 2014, the count is projected to grow to 420 stores in about 35 cities, which amounts to less than 30 percent of China's more than 120 cities with populations in excess of one million people.

“LensCrafters China has been positioned differently from LensCrafters North America. Our positioning is more premium and brands oriented. It's closer to ILORI,” says Frederic Sellers, CEO of LensCrafters China, with headquarters in Shanghai. Sellers, a former vice president of retail for Adidas in China, is largely responsible for the focus on premium brands.

“We decided two years ago on this strategy in order to address the needs of Chinese consumers for premium and branded eyewear products, which is the core of Luxottica DNA,” says Sellers. Indeed, LensCrafters' corporate offices in Shanghai have been redesigned to look similar to a LensCrafters store, with brand names and premium products dominating the design.

Whether in high-end mall settings in Shanghai or at street level in Beijing, this retail strategy is reflected in new and refitted stores launched since December 2010. The focus is on consumer experience, visual merchandising, in-store communication, product ranges, pricing strategy, services, and staff.

“When creating the new store environment, we also decided to look at building not just a new store, but rather a place for consumers to enjoy an eyewear experience. We adopted a lot of fashion retail approaches to evolve from a store you go to because you have an eye problem to a place you desire to enter and enjoy the experience, just as much as in other fashion industries,” says Sellers.

That experience now includes high tech. “During the buying process and eyewear examination process, there can be a lot of wasted waiting time for consumers. We observed consumers' behavior and decided to offer ways for people to interact with us instead of passively wait. Specifically, LEDs were put in place, as well as interactive screens. Luxottica already tested similar interactive mirrors in the OPSM Eye Hub in Melbourne, Australia, since 2010,” reports Sellers.

What's new for the China stores is digital technology that allows consumers to take pictures of themselves wearing different eyewear inside the store, and then email their photos to friends. The in-store screens also allow them to access product catalogs and brand information.

Despite being popular in the first 19 refitted LensCrafters stores into which they were designed, Sellers wasn't completely satisfied. His observation was that they lacked an essential feature: mobility.

As a result, iPads will replace the screens and be used in more stores being refitted. “In addition, we will be using this platform for staff e-training, communication, and will soon launch additional internal apps for both staff and consumers around lenses as well as fashion.

“Our motivation is simple: We want to constantly challenge this optical retail industry in China, which, let's face it, is conservative and dusty,” says Sellers.

He added: “And what better place to do it than in a country that moves at an unprecedented speed, where consumers are optimistic, flexible, fast, and very receptive to new trends?”

Paul C. Gerber, a former contributing editor of Optometric Management, has spent seven weeks in China since last summer. He is a consultant to the Rural Education Action Project (reap.stanford.edu), a partnership of Stanford University's Freeman Spogli Institute, and the Chinese Academy of Sciences, Beijing. 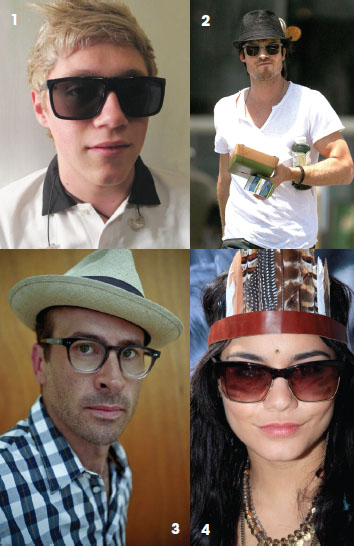 1. Singer Niall Horan of One Direction in Calvin Klein Jeans sunglass style CKJ705S by Marchon. Horan and his band mates kicked off their 2012 concert tour last month at the Mohegan Sun Arena in Connecticut.
2. Actor Ian Somerhalder was spotted in John Varvatos style V779 sunglasses by REM Eyewear. Somerhalder plays bad-boy vampire Damon Salvatore on the CW hit TV show, “The Vampire Diaries.”
3. Actor Jason Lee looking dapper in Allyn Scura style Legend eyewear in gray fade. The “My Name is Earl” alum guest starred as Mya Rudolph's love interest on the NBC comedy, “Up All Night,” which was recently picked up for a second season.
4. “Journey 2: The Mysterious Island” actress Vanessa Hudgens was all smiles in Guess style GU7164 sunglasses by Viva International Group. Hudgens stars opposite John Cusack in the upcoming thriller, “The Frozen Ground,” slated for release later this year.

■ The 2012 Business Resources Guide provides an overview of all of Transitions' resource materials in one location—Transitions.com/Pro—that is structured to help ECPs find what they need fast.
■ The updated Transitions Online Marketing Tool (TOM) allows ECPs to customize complimentary marketing materials and features a more user-friendly profile management system, making it easier for professionals to customize materials with their own information, like practice logos. It also allows ECPs to upload and manage patient mailing lists or purchase lists based on target customers for direct-mail pieces.
■ MyMulticulturalToolkit.com guides ECPs to meet the needs of growing minority populations, focusing on four key steps to growing business and improving patient satisfaction. The kit is available by calling 800-848-1506.
■ TransitionsMarketingWiz.com helps practices identify their unique marketing needs, set practice-specific marketing goals, and build a marketing plan to increase patient retention, patient acquisition, and per-patient revenue.

Compliance is an issue for eyecare practitioners with young patients who are often anxious about wearing glasses. Licensed marriage and family therapist Laura Hertfeld Katz works to combat this issue with her new book, “The Princess Who Wore Glasses.”

Katz's story centers on Princess Liana, who is given magic eyeglasses to help her see the beauty of her kingdom. Katz teaches young girls requiring vision correction the benefits of wearing eyewear, and how embracing their eyewear can help them see their world—and themselves—in a whole new way.

The book, which came out in April, is available for purchase at a variety of online retailers. More information about the book can be found at theprincesswhoworeglasses.com.