A Look at Lens Materials

Sixty-five years ago, only one lens material was available—glass. During World War II, acrylic lenses made of polymethyl methacrylate, the same material that would later be used to fabricate hard contact lenses, came to market but were unsuccessful because the material was brittle, difficult to fabricate, and easily scratched. Then, in 1945, CR-39, a hardresin polymer, became the first plastic lens material used in the industry.

Though scientists worldwide have continued to make great advances, it's not easy, as optical materials need to be so many things simultaneously: transparent or nearly transparent to all visible wavelengths; free from defects; physically and chemically stable; free of discoloration as the product ages; durable and scratch resistant; impact resistant; lightweight and comfortable to wear; and with a high index of refraction to control thickness and a high Abbe value to control dispersion and chromatic aberration.

Given all these considerations, how do you make a decision about the best lens materials for patients?

The answer is twofold: First learn about the patient's prescription and lifestyle needs; then research data about materials.

Gaining an understanding of lens materials is achieved by studying their key properties, such as those addressed below. They provide important details about how the material will perform when fabricated into lenses.

Wildebrod Snell discovered the index of refraction in 1621 when he noted that rays of light are bent in a direct ratio to the density of the material they are passing through.

The majority of high-index materials have a lower Abbe value, however, meaning that dispersion—when white light is separated into its color components—may be a problem.

For the best outcome, research all high-index options before deciding which one to use.

White light is made up of the visible spectrum of wavelengths from 380nm to 760nm, with each wavelength corresponding to different colors of light.

Dispersion, the tendency of a material to separate light in this manner, is measured by a material's Abbe value. While dispersion is the phenomenon that results in the separation of colors in a prism, it also produces undesired chromatic aberration in lenses. The higher the Abbe value of a material, the less likely it is to have problems with dispersion or chromatic aberration, which is perceived as color fringing or off-axis blurring in the lens periphery.

Specific gravity is a measurement that determines a lens material's weight. The lower the density or specific gravity of a material, the lighter it will be when fabricated into lenses.

Since higher-index lenses reflect more light, it's imperative to include an anti-reflective coating on these lenses.

For example, when using a lens with a refractive index of 1.67, a total of 11.8 percent of the light striking the lens is reflected. If a tint is also added (which will block even more light from transmitting), the patient may experience problems.

An anti-reflective coating, however, allows more than 99 percent of usable light to be transmitted through the lenses rather than being reflected off of the front and back lens surfaces.

■ CR-39. Composed of allyl diglycol carbonate, commonly referred to as “ADC,” this polymer was invented by Columbia Resin Chemical Company in 1942 and received its name because it was the 39th formulation produced by PPG Industries, which patented the material in 1945.

ADC is a lab-friendly material and readily absorbs tints. It scratches easily though, so it is usually coated. With a refractive index of 1.50, lenses made of CR-39 aren't as cosmetically appealing as lenses made with higher-index materials.

However, since the material has an Abbe value of 59, its optics are excellent. The material reflects 7.7 percent of light from the surfaces of the lens and transmits 10 percent of UVA, so it's necessary to add a UV coating.

CR-39 is available today in at least three other formulations—CR-424, CR-607, and CR-630. These materials are important in the fabrication of photochromic lenses.

■ POLYCARBONATE. When safety is an issue, polycarbonate and Trivex are the best options.

Polycarbonate is a relatively soft thermoplastic material, which means it absorbs impact rather than shattering and is also why it scratches more easily than plastic or glass (and so comes with a scratch-resistant coating). With a refractive index of 1.59 and a specific gravity of 1.21, it offers thinness and also blocks 100 percent of UVA and UVB wavelengths.

Poly's downside is dispersion.
With an Abbe value of 30, its tendency for chromatic aberration issues is the highest of any lens material.

Furthermore, some dispensers are hesitant to use polycarbonate in drill-mount frames because of its lack of tensile strength, which can result in cracks or chips around drilled holes.

Some patients still ask for glass due to its crisp optics and scratch resistance, but glass is brittle and can shatter on impact, which is why the lenses must be chemically or heat tempered.

Glass lenses are available in several indices of refraction including Crown 1.52 and high-index 1.60, 1.71, and 1.81. Crown glass has an Abbe value of 59, indicating excellent optics. While it reflects 8.2 percent light from lens surfaces, crown glass absorbs 20 percent of UVA and 79 percent of UVB (compared with polycarbonate's 100 percent absorption of UV wavelengths, for example.)

As the index of glass lenses goes up, weight increases, Abbe value goes down, the reflectance percentage rises, and UV absorption decreases.

■ TRIVEX. A proprietary urethane-based material developed by PPG Industries, it shares many similarities with polycarbonate and was originally developed for the military as a super-impact-resistant material.

This makes it a great choice for children and also for adults when safety is of concern. Trivex offers good optics due to its high Abbe value of 44, and its specific gravity of 1.11 makes it the lightest of all lens materials. Like polycarbonate, Trivex has inherent 100 percent UV protection. And, thanks to a high tensile strength, it is the material of choice for drill-mounted frames.

■ MR Series. Mitsui Chemicals is known globally as a leading manufacturer of urethane products. With the introduction of MR-6 (1.60) in 1987, the company became the first to apply thiourethane chemical technology to ophthalmic lenses. Thiourethane polymers include sulfur atoms that are responsible for the high refractive index levels of these products.
The MR Series is a brand name for Mitsui Chemicals' raw lens materials and includes MR-7 (1.67), MR-8 (1.60), MR-10 (1.67), and MR-174 (1.74). Major lens manufacturers—including Shamir Optical, Essilor International, Carl Zeiss Vision, Hoya, Younger Optics, and more—cast lens designs with these polymers.

Benefits of these urethane-based materials include thinness, low weight, and tensile strength, which make them good for rimless and wrap styles. They are also impact resistant, though not to the level of polycarbonate or Trivex, and offer good optics. The downside of these premium materials can be cost and also lower Abbe values as the indices can be high.

Learning how lens materials will perform is possible by researching the key properties of each material such as those addressed here. It can take time, but being able to anticipate the cosmetic and functional outcome of a new pair of glasses—and meeting or exceeding patients' visual and lifestyle demands—makes the effort worthwhile. EB

In the Know About Lens Materials

This fun crossword puzzle pertains to lens materials, their variety and functions. The answers to this puzzle will be listed in the September issue of Eyecare Business and online at eyecarebusiness.com. Look for clues on our Facebook page, facebook.com/eyecarebusiness. 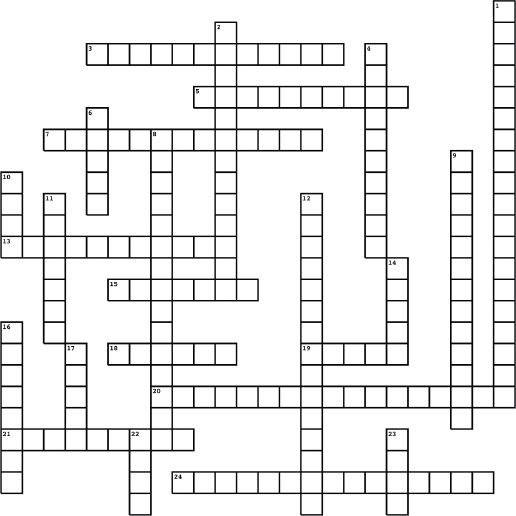 3. Several formations of CR-39 are used in the production of these lenses.

5. It has the highest Abbe value of all optical materials (two words).

7. It isn't necessary to add a UV coating to these lenses.

19. This material is a polymer composed of allyl diglycol carbonate.

20. It is a unit of measure that indicates how readily a material will refract a beam of light (three words).

24. Every lens material has these.

1. Perceived as color fringing in the periphery of lenses (two words).

2. Polycarbonate is this type of material.

4. When white light is separated into its color components.

8. Since higher-index lenses reflect more light, it's imperative to include this coating on high-index lenses.

11. Glass lenses are brittle and can do this on impact.

12. A measurement that determines the weight of lens materials (two words).

14. This lens material entered the marketplace in 1945.

16. Glass lenses are treated in this way to give added strength to the material.

22. Adding this will block more light from being transmitted through the lenses.