This year marks the 25th anniversary of the International Vision Expo East (VEE). As such, VEE 2011, set for Wednesday March 16, through Sunday, March 21, at the Jacob K. Javits Convention Center in New York City, will be celebrating in style with a new layout and special programs to commemorate its milestone year.

The recently built North Hall of the Jacob K. Javits Convention Center will be the new home of the Galleria and Underground exhibits at Vision Expo East 2011.

To help navigate through the hall onsite, VEE has created Vision Mobile. Participants can use their “My Show Planner” account on mobile devices to integrate pre-show efforts as well as explore exhibitor show specials and help guide them through the show floor with an interactive map.

Mobile Geniuses will also be on hand to provide directions and other information.

International Vision Expo will be raffling off 25 Apple iPads during the three days of the show.

Attendees can enter to win by visiting the 25th Anniversary iPad Giveaway area located at booth #MS1071 in the Medical and Scientific Pavilion.

The education program will begin a day early with the Management & Business Academy (MBA) courses, a day-and-a-half program for optometrists and their support staff. Participants will receive extensive print materials on metrics and best practices, as well as access to a resource-intensive website.

International Vision Expo and Eyecare Business are co-hosting a cocktail reception in honor of their silver anniversaries.

Optical Women's Association (OWA) is set to host a cocktail and award reception on Friday, March 18, in the new high-end North Hall at the Javits Center. At the reception, OWA will honor member Christie Walker, editor of the trade magazine LabTalk, with the organization's 12th annual Pleiades Award.

For information or to register for VEE: visionexpoeast.com.

After 18 months of deliberation, the Optical Laboratories Association (OLA) and The Vision Council have announced their joint affiliation, naming the OLA the new Laboratory Division of The Vision Council and combining the activities of both associations. The OLA will represent one of six divisions within The Vision Council providing guidance, education programs, marketing materials, research, and advocacy outreach to address common interests among members.

As of January 2011, the OLA president will have a voting seat on The Vision Council board of directors and the OLA executive director will have a non-voting seat.

In addition, the OLA Annual Meeting will be held during International Vision Expo West on September 21 through 24, 2011. Both organizations will continue to collect member feedback to help guide the transition.

The Charmant Group held its 2010 National Sales Meeting at the Marriott Marco Island Resort in Marco Island, Fla. During the three-day event, Charmant announced the launch of Puma Eyewear at Vision Expo East and debuted the launch collection of Trussardi to its sales team. In addition, Harry Aida, president of Charmant USA, was awarded the Sales Subsidiary of the Year award.

Kirk Originals celebrated the opening of its London flagship store in December 2010. The store carries the full Kirk Originals collection, as well as a selection of independent eyewear brands, such as Baumvision's The Leisure Society, exclusive to the United Kingdom.

Santinelli International held its 2011 Sales Meeting in Florida last month. During the event, the national sales team gathered to review the state of the industry. The company also celebrated its 20-year exclusive distributorship of NIDEK lens finishing equipment in the U.S. and acknowledged its top sales consultants.

Joseph Monestere, president of the Opticians Alliance of New York, presented a Certificate of Appreciation to Leonard Maggiore for over 50 years of dedication and service to the opticianry profession. Monestere also presented a donation check to Dr. Dorothy Ewald of Volunteer Optometric Services to Humanity-NY, an organization dedicated to providing free eyecare to disadvantaged people from all corners of the world.

The Kenmark Group recently honored its top territory managers for their outstanding performances in 2010. The award winners were recognized for their exceptional performances, outstanding sales efforts, and consistent customer satisfaction. 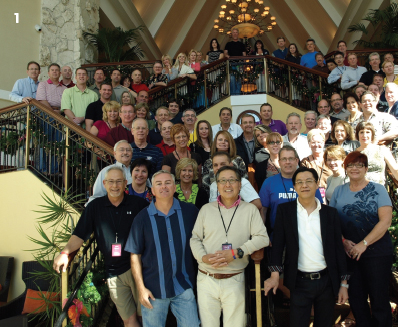 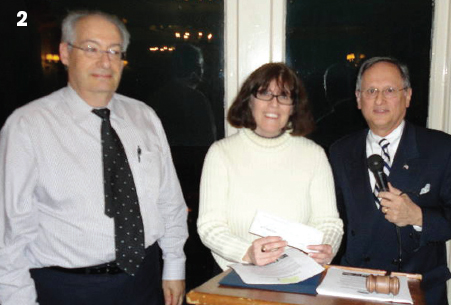 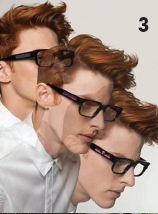 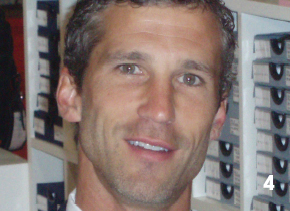 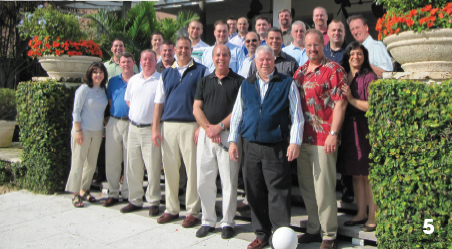 “As we further advance our sales offering, we recognize the value of expanding services,” says Barney Dougher, president of Hoya Vision Care. “The alliance with Santinelli will expand our capabilities while offering our customers reliable options for in-office finishing.”

Gerard Santinelli, president and CEO of Santinelli International, adds: “We're excited to add Hoya, a leader in lens technology, as a key strategic alliance partner in order to provide added value to our customer base. With the many existing opportunities and benefits that in-office finishing provides, partnering with a company like Hoya will enhance the ECPs competitive advantages improving their quality, control, customer service, and profitability.”

Marchon has been issued a U.S. patent for its curved M3D three-dimensional lenses. The patent protects the invention of curved lenses configured to decode 3D content and is directed to the curved lenses, the assembled frames, as well as the method of manufacturing the curved lenses.

Marchon3D, a division of Marchon Eyewear, is using the patented technology to produce several lines of cutting-edge, passive 3D eyewear for use in theaters, 3D gaming consoles, and passive 3D televisions and computers. The M3D lenses can be inserted into designer and premium-style frames and provide 100 percent UVA/UVB/UVC protection, allowing wearers to use Marchon3D eyewear as sunglasses.

“The grant of our first patent by the U.S. Patent Office is key not only to our portfolio of intellectual property, but assures broad protection for both our existing and future innovations and products. The scope of protection afforded by this patent allows us to further establish ourselves as the industry leader in bringing passive 3D content to consumers,” says David Johnson, president of Marchon3D. The company has other pending applications, both in the U.S. and other countries, relating to different aspects of the M3D lenses.

VSP Global has announced the launch of the beta test of Eyeconic.com, an online optical retail store, for February 18, 2011. The website is designed to help independent eyecare providers to compete with online optical retailers by enabling them to order contact lenses and browse, select, virtually try-on, and purchase sunwear and prescription eyewear using the Marchon and Altair portfolio of products. Additional frames may be available in the future.

The beta version will enable almost 500,000 VSP members to use the website to purchase contact lenses, prescription eyewear, and sunwear. Once the test is complete, VSP will launch the site to all 55 million VSP Vision Care members.

The company's focus is on the ECP market, offering a variety of equipment ranging from affordable entry-level equipment and the latest versions of Gamma and Kappa edgers to the Mr. Blue edging system (formerly distributed by Gerber Coburn).

Robin Rhodes, an experienced sales executive who has built and managed successful sales forces at Essilor and Carl Zeiss Vision, is the new company's director of sales. The new division will report to Satisloh/National Optronics with Rhodes directly reporting to Andy Huthofer, CEO of National Optronics.

Looking for a new way to build brand identity while rewarding customers or incentivizing employees? One option is prepaid Visa Incentive Cards, such as the one shown below from Incentive CardLab.

The company reports the pre-paid cards can be designed to carry the logo or “look” of any company, thanks to a self-service design portal and on-demand production system that allows customers to upload their own logo or image of their choice. Cards are available in denominations starting at $5. There is no minimum order. 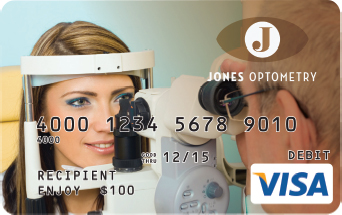 Nigura Metzler Optical International has signed a worldwide license agreement for prescription frames and sunglasses with British luxury car maker Aston Martin. The collection will be developed as an exclusive line and made available through selected trade partners. The launch of the Aston Martin Collection is planned for June 2011.

Safilo Group has announced the renewal of its Yves Saint Laurent license agreement for the design, production, and worldwide distribution of the brand's optical frames and sunglasses. The penned agreement is effective until Dec. 31, 2015. In a separate announcement, Safilo also confirmed the renewal of its license agreement with Bottega Veneta. Originally set in 2001 with the Gucci Group, the license renewal expires on the last day of 2020.

Bausch + Lomb has issued a voluntary recall of its Soothe Xtra Hydration (XH) eye drops after a small number of consumer reports cited the presence of possible foreign matter in the tip of the bottles. Initial testing conducted by Bausch + Lomb on the opened, partially used product has identified the particles as mold. While there have been no adverse events reported for this product in connection with mold, the company has chosen to recall the product in the interest of patient safety.

The company is currently conducting an ongoing investigation into the reports of mold in the tip of the bottles. A determination of future product distribution will be made at the close of this investigation, which could last several months.

The recall is limited only to the United States. Bausch + Lomb has directly contacted U.S. retailers who have been shipped this product to initiate the recall and inform them of the steps they should take to return the product. The Company has also contacted eyecare professionals to alert them of the recall.

2. Supermodel Heidi Klum was spotted wearing Tana by Mosley Tribes from Oliver Peoples while out with her family. The “Project Runway” host was recently named the new face and artistic advisor for Astor Cosmetics. 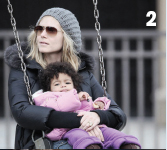 3. Known for her bold fashion choices, singer Lady Gaga was spotted in Mykita and Marios Schwab sunglass style Jane. Gaga's new album, “Born This Way,” will be released on May 23, 2011. 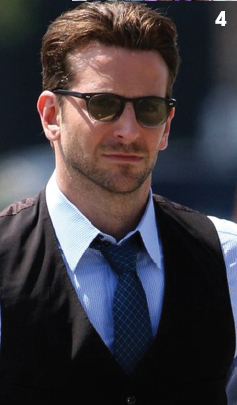